Mozart in Venice (not the Jungle)

Yes, loyal readers (LOL), I binge-watched another season of Mozart in the Jungle because clearly I hate myself. THIS was how I decided to spend my first day of winter break?

In the interest of maintaining IH’s tradition of blogging after each season of the show, here we go: Season 3!

We start off in Venice, where Rodrigo (the ever-dreamy Gael Garcia Bernal who is the only reason to watch this show, basically) is hoping to convince opera queen Alessandra aka “La Fiamma” (Monica Belucci who looks fantastic, not just for her age but in general) to return to the stage. There’s only one rule provided to Rodrigo by Alessandra’s assistant/ex-husband: he is not allowed to sleep with her. Of course, he sleeps with her.

Meanwhile, Highligh (Hailey, who is sporting quite the hairstyle this season. I’d describe it as as mullet with short bangs? very 80s rocker) also happens to be traveling Europe with the Andrew Walsh (Dermot Mulroney) Ensemble. During their stint in Venice (hey, look!) she is truly insufferable as she runs around with her gay friend, sleeps with a mime and then throws up in the middle of a performance. Dermot, erm, Andrew is pissed and fires her (#tbt to when they slept together that one time). Highligh is now stuck in Venice but alas, Alessandra and Rodrigo just happened to attend that show and allow her to stay with them while they rehearse.

Back in New York, the orchestra is on strike and have started picketing. Gloria and Thomas have found comfort in each other and have started getting it on. Cool, good for you guys. Gloria is also still trying to get Rodrigo back on board and even calls him while in Venice. Rodrigo hears her voice, she mentions the mayor (he wants the orchestra and management to meet to end the lockout), and Rodridgo throws the phone out the window to some kids playing outside. Yeah, it’s all a bit ridiculous and slow and we begin to wonder why we have spent so much time in Europe. Oh, right, the opera. 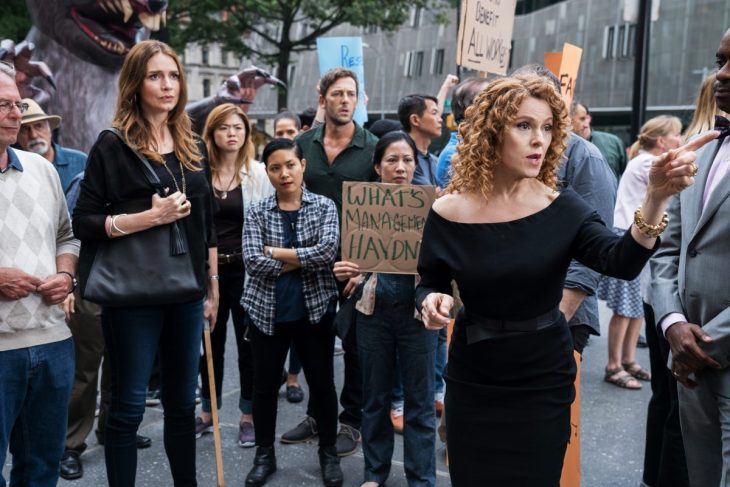 Rodrigo sleeps with Alessandra, she flips out and runs away, he goes after her (while Gloria jumps onto a gondola in pursuit because apparently she and Thomas are also in Venice now). Alessandra agrees to sing but she’s definitely not happy with Rodrigo. It doesn’t help that she saw him and Highligh kiss (because that is still the main story). Rodrigo’s also in bad shape because Placido Domingo (um, HELLO) just told him that his mentor died.

Yikes, on the night of the opera? The opera goes mostly well-Highligh fears that Alessandra will shoot Rodrigo because she already used a real knife to knick his little rattail DURING the performance (Girl, thank you for doing us all a solid). The world watches as she awkwardly runs onto the floating stage to quietly gasp “stop!” as Alessandra lifts her gun up. Everybody is fine and they put on a great show but it’s clear Alessandra does not want to work with Rodrigo again. Girl’s got some issues. Great voice but major issues.

Right before she chops off his rattail (BLESS)

Everyone but Alessandra returns to New York, where we find out that Highligh’s roomie Lizzie has bought a bar and is dressing up like a Czech composer. Sure. The lockout ends (finally) and Rodrigo comes up with a great first performance idea-they will perform at Rikers. There’s this whole episode that’s supposed to be a documentary by Bradford Sharpe (played by Jason Schwartzman, a Coppola). It’s kinda moving but also excruciatingly slow. Anyway, the orchestra is back.

Meanwhile, Rodrigo can’t sleep and has taken a pay cut so he kinda just couch hops. Gloria takes Thomas to visit her parents, where he discloses that he wouldn’t want to marry her. Ooh, no, Thomas, no. Highligh also now wants to be a conductor and takes lessons from Thomas after an initial lesson with Rodrigo. She premieres Thomas’ new composition at opening night of Lizzie’s bar. Highligh seems to be having fun but what about her oboe?!

Never fear, she’s still interested in her instrument! In fact, Betty the former bitch 1st oboist, is now retiring so that spot’s open. Highligh auditions and so does a cute Asian guy from Chicago. Long story short, they go with the Asian guy. Rodrigo goes to Highligh to break the news and they end up…sleeping together?! Oh yeah, Cynthia has gotten surgery for her carpal tunnel so who knows if she will be able to play again?

While there were some totally pointless arcs and appearances from Yung Mozart, Yung Bach and even Yung Nano (Mozart’s sister), Season 3 was enjoyable and clearly watchable since I got through it in a day. Can’t say the same for Season 2.