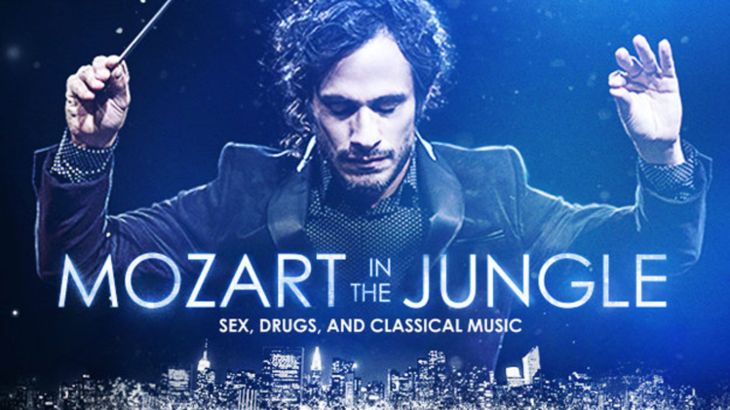 When Gael García Bernal won the Golden Globe for Best Actor in a TV Series-Comedy, I was pleased. After his unforgettable turn in Alfonso Cuaron’s “Y Tu Mamá También” in 2001 and his role in Jon Stewart’s debut film, “Rosewater” in 2014, it’s nice to see Gael on American television or at least American Internet-streaming television. His genuine shock at winning  only added to his charm, as he beat out perceived HFPA favorite, Jeffrey Tambor. Like Marcy, maybe the HFPA just wasn’t feeling Transparent Season 2.

But when Mozart in the Jungle won for Best TV Series- Comedy, I groaned. Already predicting Amazon’s gloating email the next morning about its original show winning 2 Golden Globes , I decided to be proactive and start the series right after the ceremony. Well here I am, less than 24 hours later, just having finished Season 1.

Before you think I don’t have a job and I just binge-watched all day, let me clarify: I watched on the train, which conveniently struck a car today (no fatalities or injuries, thank goodness), as if to support my binging habit. Shoutout to the Amazon Instant Video app. Also shoutout to T-Mobile’s Binge On for facilitating this incredible feat.

Mozart in the Jungle is the Coppola-Schwartzman (who is a Coppola) produced Amazon original inspired by a book of the same name. It’s the show that nobody bothered to watch, instead clicking on “The Man in the High Castle” when logging into their Amazon Prime accounts. No one but Marcy, who watched the first episode like over a year ago. Seriously. I can confirm this and can probably even dig up the first FB chat message exchanged over this show.

Anyway, the show centers around the new conductor Rodrigo( Mozart!) -played by Gael- of the New York (the Jungle!) Symphony Orchestra. The exiting conductor Thomas Pembridge, played by a fantastically grumpy Malcolm McDowell, is pissed that this young, cool-haired foreigner is taking over his baby and flees to an initially undisclosed location. Turns out it’s Cuba, which we figure out when his on-off again mistress Cynthia the bassist (played by an unbelievably cool Saffron Burrows…awesome name btw) casually flies there to check on him.

Anyway, back to Mozart in the Jungle. Cynthia befriends a twenty-six year old oboist, Hailey Rutledge. Side note: Ok, when I first saw Hailey, I thought “Is that Jemima Kirke?!” I was too lazy to do my Googles so I watched a couple more episodes before giving in and Googling. I found out that Hailey is played by Lola Kirke, Jemima’s sister! Cool story, huh? Ok, no, not the point.

Hailey really wants to play in the orchestra and eventually becomes Rodrigo’s assistant, making him mates and cutting his luscious locks but leaving a disgusting few rattails. C’mon Hailey, you should know better than to leave these  hanging smh . She also replaces Sharon, the Asian assistant who Rodrigo once made out with. (Actually, wait what happened to Sharon?! Coppolas: I demand an explanation)

Honestly, the best part of this show is the way that Gael says Hailey’s name. It’s very phonetically accurate, if that makes sense. Like it starts off sounding like the first part of “highlighter” (before the “ter” part).

Anyway Highligh -uh- sorry, Hailey lives with an artsy girl Lizzie who is a recovering prep-school rich kid and is now a tattoo artist or something (We discover this at a rich person party which I originally mistook for a Playboy party but was actually just hosted by some old woman named Bunny). Hailey is also dating a Juilliard dancer turned butt-model named Alex who is eerily similar to that one bisexual guy on Broad City but not as much of an idiot.

She ditches her roomie and Alex whenever Rodrigo needs her, which is quite often, especially when he has the urge to see his crazy ex (or maybe current) wife Anna Maria, played by Nora Arnezeder. I’m still not really sure what kind of accent Anna Maria is supposed to have because it fluctuates from French to Spanish to American. Anyway she is insane and breaks violins and screams wherever she plays, whether in Greenland or in a graveyard.

As far as the story is concerned,the season progresses slowly (the final episode is Rodrigo’s conductorial debut…sort of). I found myself flying through the season only because each episode is about 25 minutes and the “Next Episode” button is so conveniently located on the Amazon app. There are some noteworthy cameos: Jason Schwartzman has a role as Bradford Sharpe (B Sharp…GET IT?!), a nerdy podcaster who’s got a thing for Hailey’s roommate and Wallace Shawn guest-stars as a pianist with mommy issues and a thing for hypnotism.

Obviously, there are a lot of classical music references that fly over my head. I may not be well-versed in this scene, but I can’t be the only one who thought it was bizarre when Rodrigo imagined Mozart talking to him in the library. It’s probably better if we don’t have random Mozart flashbacks. Just a thought.

Mozart, pictured here in the library and not the Jungle

Overall, I did enjoy Gael’s performance and I can see how the HFPA could say that he deserved the Globe over say, Aziz, who really just played an exaggerated version of himself (or his standup character) in “Master of None.” Still, a little shocked that Mozart won the comedy show category but I’m willing to give it a shot for Season 2. After all, when Amazon makes it so easy to watch, why not? Oh also, I need to know if Highligh and Rodrigo get together in the next season or if she stays with butt model Alex.